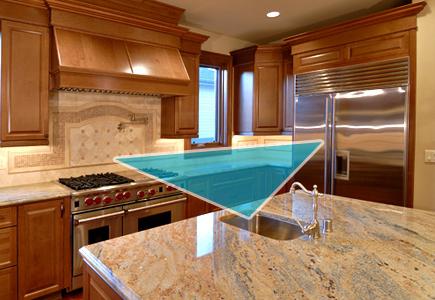 Your lifestyle should determine the functionality of your kitchen, not the other way around. The work triangle is not a law, merely a suggestion for good space planning.

The dominant geometric shapes in most kitchens are the four-sided variety, from rectangular cabinetry to square appliances. But it is a triangle — albeit an imaginary one — that has always been an important element of a kitchen's design and functionality.

Efficiency is the triangle's main goal, as it keeps all the major work stations near the cook, without placing them so close that the kitchen becomes cramped. The work triangle is also designed to minimize traffic within the kitchen so the cook isn't interrupted or interfered with.

Here are some examples of standard kitchen layouts with their work triangle: 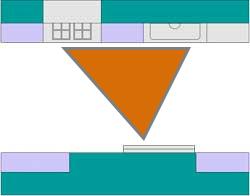 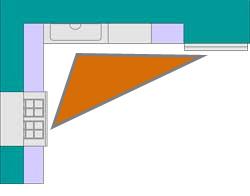 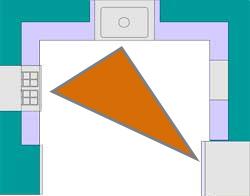 The work triangle isn't without its flaws though. The layouts above illustrate one of its problems: It assumes that a kitchen will only have three major work stations and one person cooking. As kitchens grow in size, and feature more than three workspaces, the regular work triangle isn't always practical. And in many households today, two or more people share cooking duties. Because of these issues, designers do not always play by the triangle's rules when it comes to drafting kitchen plans.

"We haven't thrown the idea of the standard work triangle out the window, but creating a triangle just for the sake of having one isn't always the best thing to do when designing a kitchen," says Linda Larisch, CKD, CBD, a designer who works with Smartrooms in Chicago. "With many of the kitchens we design, we'll have more than one work triangle in it. If you can't configure the standard triangle, you have to make do by creating the most functional kitchen possible."

Remember, your lifestyle should determine the functionality of your kitchen, not the other way around. The work triangle is not a law, merely a suggestion. Although it can be a helpful tool, don't let it inhibit you from thinking outside the triangle when it comes to designing your kitchen.