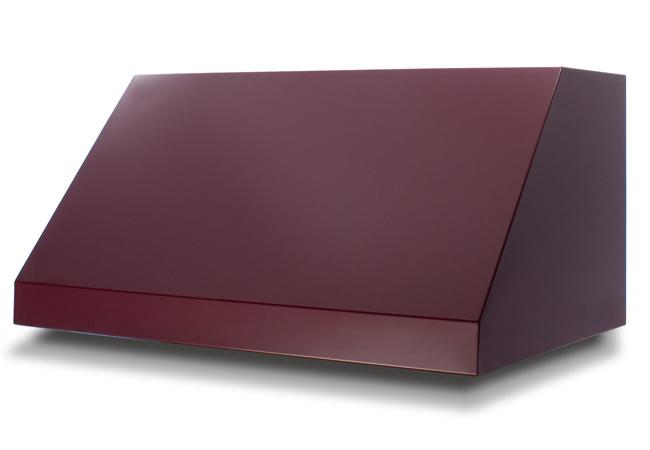 With 190 colors available, these new range hoods are truly customizable to any kitchen. The BlueStar Pro-Line hoods come in sizes ranging from 30 to 66 inches with a canopy hood that gives a clean, professional look. Boasting between 600 and 1,200 CFM and dishwasher-safe filters, this hood is both powerful and practical. Hidden control knobs and a quiet blower give it subtlety and style. BlueStar

The Easiest Appliance in the Kitchen 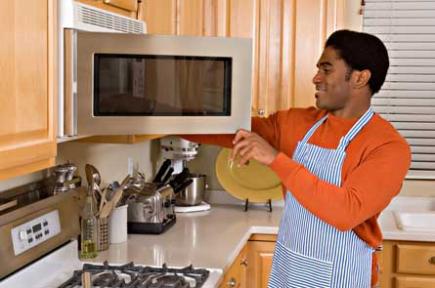 Microwaves cook by getting water molecules in the food moving in a rapidly alternating electrical field. The National Kitchen and Bath Association recommends that microwaves operate on 750 to 1,000 watts to cook effectively.

Special features include programmed buttons for popping popcorn and for reheating everyday foods, such as pasta and veggies, and sensors that cook according to the moisture level of the food. Microwaves can be placed on the counter or built into a tall cabinet or shelf that's been mounted under a cabinet.

How many burners do you prefer on your cooktop or range? 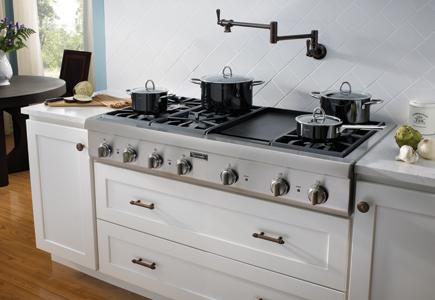 For chef Randall Selland, this is the ideal burner configuration.

Chef Selland: I wouldn’t mind having more than four burners, but in my home, I just don’t have room for a bigger stove. Eventually I’ll be remodeling my home kitchen and I plan on getting a six-burner range. I saw the perfect one; it had four burners together, then a griddle and two more burners to the side.

Chef Vizethann: I like having six burners. Because I use an electric stove, what I like to do is put one burner on high, and the burner right next to it on medium or low, so if I need to switch my heat really quickly, I can switch it over to the other burner.

Verdict: Just about all our chefs preferred having six burners in their restaurant kitchen and home kitchen. Of course, they are used to cooking many different items at once. 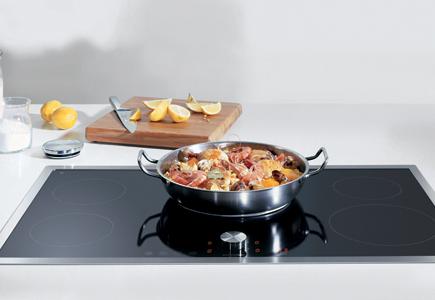 Induction burners distribute heat well, but are they something pro chefs like to use?

Chef Holmes: I don’t. I need to see a flame and control it. I don’t care if [induction burners] can bring water to a boil in five seconds: I don’t need that.

Chef Subido: I have used induction for cooking pastries and omelets, because induction burners help cook those things evenly. So if you’re using it for making caramel or sugar work, it works really well.

Verdict: Our chefs who liked induction burners used them primarily for pastries. If you like — or want — to frequently make pastries, you can purchase a portable induction burner if you’re not ready to commit to an induction cooktop or range.

More in this category:« Gas vs. ElectricNumber of Burners »
Read Full Post ➤

When you’re cooking at home, are microwaves shunned or are they saviors? 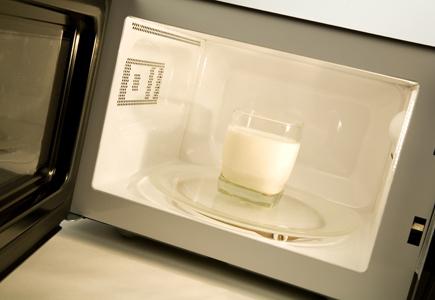 Warming up liquids is one of the few things a microwave was deemed suitable to do.

Chef Holmes: I refuse to have a microwave in my kitchen, in both my home and my restaurant kitchen. Maybe there are decent microwaves out there now, but that type of cooking is just weird to me.

Chef Selland: I think if you do use them to do any sort of cooking, it’s going to cook things really unevenly. With just a little bit of effort you can cook anything without it and it’ll turn out much better.

Verdict: Our chefs pretty much stayed away from microwaves in both their homes and their restaurant kitchens, although a few mentioned a microwave is useful for melting butter or warming up coffee. It’s certainly not breaking news, but if taste is a higher priority than convenience, then a microwave might be an unnecessary appliance.

Do you prefer to have a range or a separate cooktop and oven? 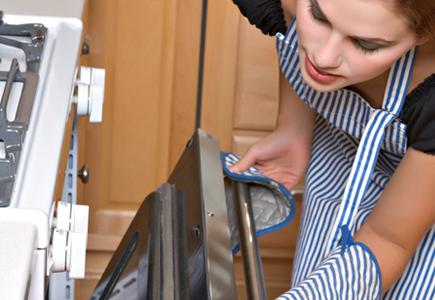 Being able to easily transition items from the oven to the stovetop is one reason Chef James Holmes prefers using a range.

Chef Holmes: Professionally I like having a range because often times I’ll be searing something in a pan and finishing the dish in the oven.

Chef Vizethann: In my home they are separate. And I don’t mind that at all. But in a commercial kitchen you almost always find a range.

Verdict: Ranges were preferred for restaurant kitchens. As Chef Holmes alluded to, ranges make it easy to transfer a pan from the cooktop into the oven, or vice versa. At home it can come down to a matter of style and what is most functional for your kitchen layout. None of our chefs stated there was a difference in performance from one to the other.

More in this category:« Number of BurnersMicrowaves: Shunned or Saviors »
Read Full Post ➤ 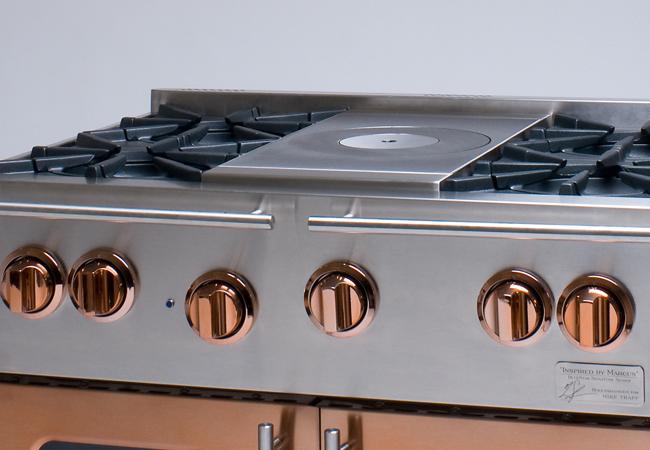 A French top looks similar to a griddle: It's a large, flat surface typically made from stainless steel that sits on the rangetop. Unlike a griddle, a burner is placed below the center of a French top. Marked by a circular, removable plate, the center of a French top is the hottest point. The further away you get from the center, the more the surface temperature diminishes. Pots and pans can be placed directly on the French top, or the plate can be removed to place a pan directly over the burner, or to put a wok ring over the burner.

French tops are typically found in commercial settings, and are usually only offered by high-end residential range manufacturers.

Why you'd want one: A French top can be beneficial if much of your cooking revolves around slow cooking and cooking sauces. French tops allow you to easily maneuver cookware from hot areas to cooler areas without having to change the burner setting or rearrange cookware from one burner to another.

Understanding the Pros and Cons of Various Wall Oven Units 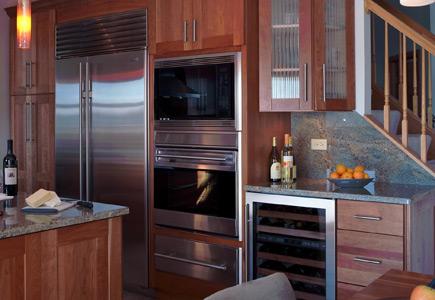 Ovens can be part of a range or stove or a separate appliance built into a wall. Conventional ovens and microwave ovens are well-established necessities in most home kitchens. However, as more homeowners look for professional features in their cooking appliances, both convection ovens and combination ovens are growing in popularity.

Convection Ovens
Convection ovens work faster than conventional ovens. A heating source warms the air closest to it. That air drifts away and is replaced by cooler air that goes through the same process. A fan keeps the air circulating so that it stays hot and penetrates the food faster (in a conventional oven, the air rises and falls as its temperature changes, rather than by the aid of a fan). The technique was developed in the 1950s to help commercial bakers save time and cook their breads more evenly. All convection ovens are electric.

Combination Microwave/Oven
Some ovens combine the advantages of several types. You can purchase a conventional oven with a convection option, for example. Or you can buy a microwave/halogen light oven that can be used as a regular microwave or as a halogen light cooker-which can quicken cooking times so that a baked potato is done in 13 minutes instead of an hour. A combination convection/microwave will allow you to brown food so it looks as if it has been cooked in a conventional oven. 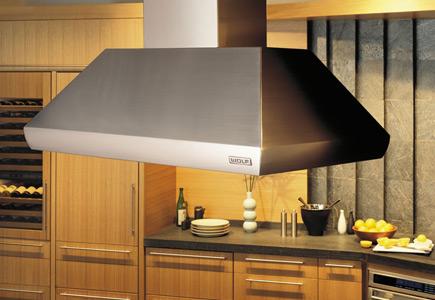 A chimney-style ventilation hood works well over islands without obstructing too much of the view.

No matter how fabulous your dishes taste, cooking them generates greasy, smoky, steamy, gaseous byproducts that you don't want hanging around your kitchen. Catch them with an updraft or a downdraft and send them totally out of your home or through a system that recirculates filtered air. Which system you choose will depend on the layout and structure of your kitchen, your local building codes, and your own style preferences.

You'll pay more for systems with higher airflow and lower noise ratings. That's where knowledge of CFMs and sones will come in handy. CFMs refer to the amount of cubic feet of air a vent system can move per minute. The National Kitchen and Bath Association recommends a 150 CFM minimum for all surface cooking appliances. Sones measure noise level. A refrigerator equals about 1 sone; ordinary conversation about 4; and a jet plane landing about 256. The Home Ventilating Institute recommends that kitchen vent fans should not be louder than 9 sones.

Your two basic options are an updraft ventilation hood or a downdraft vent.

Updraft vent hood
Located over a range or cooktop, a vent or range hood works in one of two ways: The polluted air rises, is pulled up by a fan, passes through filters, and is exhausted outdoors through a metal duct. Or a fan draws the polluted air through filters and then recirculates the cleaned air back into the kitchen.

Downdraft vent
Instead of being placed over the cooking area, a downdraft blower is built into a base cabinet. It exhausts air by pulling it down through vents placed on the sides and back of the cooktop. Or you can buy a separate blower with a vent that raises up behind the cooktop while you're cooking and then lowers out of view when you're done. 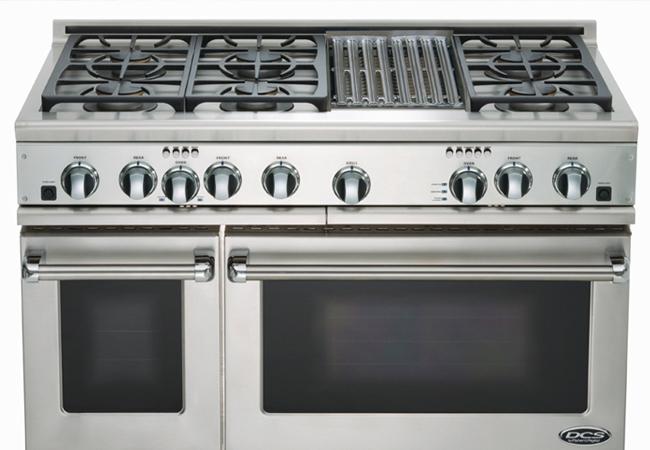 In their most basic form, ranges have burners for cooking with a pan, and ovens for baking. But as more people want to cook like the pros, extra range options have been added. These options aren't standard, and most will increase the cost of the range.